A new personification of the nation's 16th president, good 'ol Honest Abe, is coming to Naperville during a dedication tied to Illinois' bicentennial celebrations.

Century Walk Corp. is hosting the dedication of its 50th piece of public art in Naperville since 1996 in conjunction with a Naperville Municipal Band concert and Century Walk's first fundraiser.

"Laughing Lincoln" has been in the works since 2015, after the death of former Naperville City Council member and Central Park advocate Don Wehrli. In partnership with Century Walk, the Wehrli family has selected an artist to complete a cast-bronze statue of Abraham Lincoln at age 30, a time when he worked as a lawyer and Illinois state legislator.

In that early role, Lincoln could have helped establish the late Wehrli's beloved Central Park as the DuPage County seat and site of the county's first courthouse.

In 1839, Naperville town founder Joseph Naper, then a state legislator along with Lincoln, was pushing to create DuPage County out of nine townships in Cook County, and 30-year-old Lincoln voted against his party to help make that happen. Three years earlier, Naper had voted against his party to support Lincoln's initiative to move the state capitol from Vandalia to Springfield, so some say the votes were a negotiated swap.

Thus 30-year-old Lincoln, as a smiling storyteller, soon will be installed on a perch in Central Park to stay for decades or longer. The Wehrli family and Century Walk are halfway to a $120,000 fundraising goal to support the sculpture.

Wyoming-based artist David Alan Clark is looking forward to his piece joining the Naperville art landscape and showing people a Lincoln not yet worn down by the ravages of the Civil War.

"It's a really captivating idea to have a 'Laughing Lincoln,'" Clark said. "He was a very animated figure. He was a very lively individual and conversationalist, especially in his younger years. He was very much prone to telling jokes and stories. It's a contrast to how you always see him -- very grim."

Wehrli's family, including daughter Mary Lou Wehrli, selected Clark from among artists who applied to create the fresh representation.

"We wanted to have an artist who didn't have a presence here yet and whose work spoke to us," she said.

Clark will drive the cast-bronze piece in the back of his pickup truck from Wyoming to Naperville before Nov. 30, when the sculpture will be installed at a base dedicated Sept. 30 during a "Laughing Lincoln Jubilee."

The public can attend the band concert and the sculpture dedication for free on Dec 2. Those who want to attend Century Walk's Bicentennial Birthday Bash from 3 to 5 p.m. can buy a $100 ticket from a link on the Century Walk website. The event comes one day before the state's culmination of its year of bicentennial celebrations with a major event at Navy Pier.

Honorary chairmen and chairwomen for the Naperville event include Ruth and Harris Fawell, as well as Mary Locher, wife of the late Dick Locher, who drew the Dick Tracy comic strip after taking it over from creator Chester Gould and made the sketches for the Dick Tracy sculpture installed along the Naperville Riverwalk in 2010.

Locher said the new piece will bring a welcome historical presence to the city.

"I think it's nice that we're finally having Lincoln someplace in Naperville," Locher said. "It's nice to have him portrayed in a different manner. I think it will appeal to young people." 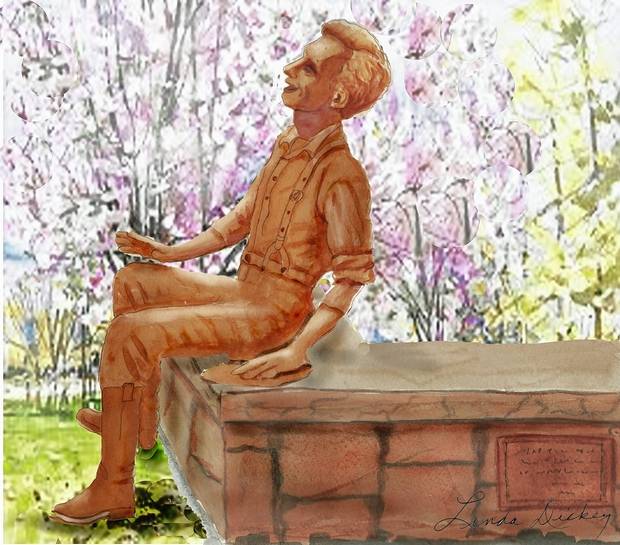