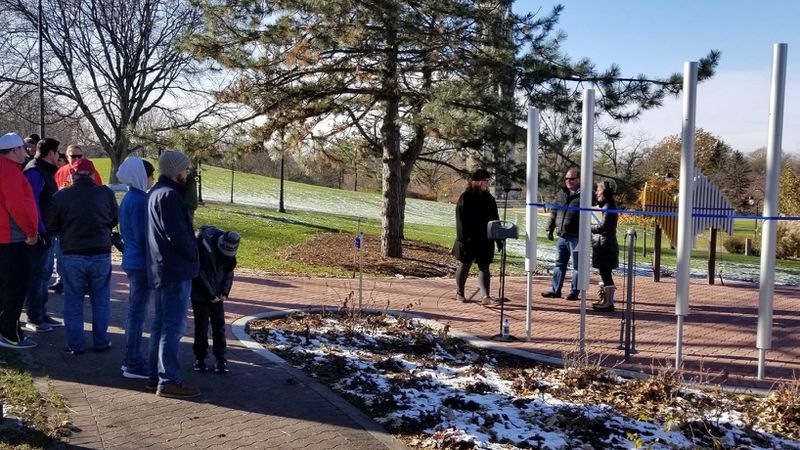 Rotary Harmony Park in downtown Naperville was officially dedicated Saturday. The park has four xylophone-type instruments that anyone can use. (David Sharos/Naperville Sun)

“Back in the day, I used to play drums,” McGury said. “I was thinking I might go up and maybe play ‘Back in Black’ by AC/DC.”

The sound of music will be heard for years along a portion of Naperville’s Riverwalk thanks to the installation of Rotary Harmony Park, which received a dedication ceremony and official opening Saturday afternoon in Naperville.

Rotary Club of Naperville members along with officials from the city, park district, the Riverwalk and Century Walk commissions joined residents for a ribbon-cutting followed by a 30-minute program that included remarks from Mayor Steve Chirico and members of the Rotary Club.

Immediate Past President John Norman of the Rotary Club of Naperville said the project began about 18 months ago when he and fellow Rotary member Alma Jones were at a convention in Atlanta.

“We found these beautifully sculpted musical instruments that are installed outdoors and withstand any type of weather and anyone can play them,” Norman explained. “There are no wrong notes, and this is a gift from Rotary to the city to create harmony right in our own backyard. Music is a universal language and bridges the age gap, physicality and creates a sense of community and belonging.”

A total of four instruments were purchased from the Durango, Colorado-based Freenotes Harmony Park, which has been making sustainable outdoor instruments for 20 years. All were roughly based on a xylophone design, Norman said, adding that the project cost roughly $65,000.

“One of the reasons we have the four instruments was money, but having four also reflects the four-way test of the Rotary which questions if something tells the truth, is fair to all, benefits everyone and builds goodwill,” he said.

Jones, the current president nominee of the Rotary Club of Naperville, said the new installation “is therapeutic and will cater to all ages and is a way of fostering harmony.”

She said that instruments being struck with mallets close to Aurora Avenue will not be a nuisance to neighbors or drivers. A ribbon-cutting was held Saturday for Rotary Harmony Park in Naperville. The park has four xylophone-type instruments that visitors to the park can use. (David Sharos/Naperville Sun)

“We actually had a noise study done before this installation and found that all of the homes and traffic within a certain radius will not have an issue as the sound is double digits below the allowable threshold,” Jones said. “This is our gift to the community and we wanted to jump through as many hoops as we had to in order to make this happen.”

Naperville resident Kristen Eccles was on hand for the ceremony Saturday and called the new park “an enhancement for Naperville” as well as a worthwhile attraction for kids.

“There are not a lot of activities for kids along this portion of the area and this is a great opportunity for them to have a hands-on experience,” she said. “We saw a mom walk by earlier and her daughter immediately ran to the instruments, picked up a mallet, and struck one – that’s a good sign.”

“If we had more time, we were hoping to have some band students from Naperville Central come out and play some music, but in time, maybe kids will be able to offer a little concert,” she said.

“I think kids will want to play with the instruments but adults will see this as something more cultural,” he said.

“I think this provides a spontaneous place and an outlet for music in our parks that has not been done before and is one of those things that is unique,” he said. “All the people in Rotary liked the idea and this location provides a great site and it’s inspirational with the trees.”

McGury called the project “another great partnership” with a Naperville group, adding the park “was in a perfect location.”

“This is another example of what makes Naperville special and another thing for kids to enjoy, plus we always support anything that gets people outdoors,” McGury said. “I’m just afraid if I play anything there, the dogs will start screeching.”